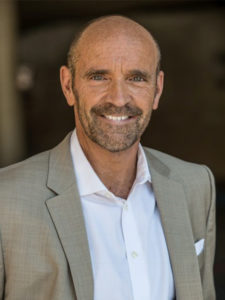 Simon Keith is not just a former professional soccer player—he’s one of the longest-living organ transplant recipients in the world, having received a heart transplant when he was just 21 years old. Remarkably, Simon went on to play competitive soccer and was drafted #1 overall into the USA’s Major Indoor Soccer League just three years after his surgery. Captivating audiences with his incredible story, Simon challenges people to find their “moments of truth” and dares them to live.

Simon began his soccer career at the University of Nevada Las Vegas (UNLV), playing two seasons with the Rebels and garnering many honors, including being named Student-Athlete of Year for the Conference as well as being voted as the USA’s Most Courageous Athlete. After his senior season, Simon was named the Most Valuable Player at the Senior Bowl, and was drafted #1 overall into the Major Indoor Soccer League.

In 2011, he founded The Simon Keith Foundation, an organization dedicated to increasing organ donor awareness and educating transplant recipients. His autobiography, Heart for the Game, details his unique life-journey, and he directs the proceeds from his book sales toward providing athletic training for other transplant recipients who undertake an active and healthy lifestyle. A member of numerous sports halls of fame, Simon was awarded Canada’s Humanitarian Leader of the Year award in 2015 for the David Foster Foundation.

In addition to his philanthropic efforts and professional soccer career, Simon is a successful entrepreneur who currently serves as the Chief Operating Officer for the Nevada Donor Network.

Simon’s presentations will captive your team. Developing leadership concepts, exploring the role of fear and courage in the success of everyday life and business, and inspiring your teams to embrace their lives, Simon has developed a speaking style that will change your audiences’ lives.

In our lives, all of our lives, we tend to define ourselves by MOMENTS. These moments shape who we are and how we view ourselves. The birth of a child, getting married, a big promotion are all moments that many of us celebrate. But what if the moments in your life are not always expected. How do you prepare for moments when you don’t know when or how they will come? Why do some people seem to ‘execute’ their moments better than others? What if your moment seems bigger than what you can handle? Simon talks about the Moments in his life and how “being flat on your back at age 21, and about to have your heart taken out of your chest” certainly qualifies as a Moment. How Simon moved forward from that potentially crippling event and was able to live an incredible heart stopping life.

Why does FEAR inhibit our behavior?  Why do we allow FEAR to become the overriding presence in our lives?  Is overcoming FEAR the number one difference that make the ultra successful “different” than the masses?  Simon explores this concept as part of his LEADERSHIP training and pushes the audience to come to grips with their fears and what steps they can take to overcome this often times debilitating state of mind.  After participating in this KEY NOTE speech – you will be motivated more than ever to implement the strategies to overcome YOUR FEARS.

Simon has dedicated his life studying and understanding what it takes to be a Champion.  Having identified 6 Major Characteristics, Simon speaks about the importance of each and uses anecdotal evidence based on his and other “Champions” lives.

Changing the Perception of Organ Transplantation

Simon communicates a unique perspective on what it “feels” like to be the recipient of a lifesaving organ transplant…even if you don’t want to really talk about. A 25-year struggle in learning to how to interact with others who expect you to be someone different than who you are (or ever were). Why do people want you to be “different”? Why do they treat you as “different”? Does it help you that they want you to be “special” or does it further handicap you? As a recipient who has fought prejudice and pre-conceived notions, Simon delivers a message that anyone battling an illness, struggle, or challenge will simply be inspired to hear. A must see presentation! Simon’s messages tell an incredible story of HEART, PASSION, and DETERMINATION. He will captivate your audience with his “Moments of Truth” and will DARE YOU TO LIVE.

“Recently, we selected Simon Keith to speak at our Anytime Fitness Annual Conference. Our audience is franchise owners and managers in our health clubs from all over the world. Simon’s message on moments of truth absolutely motivated and inspired our group, who is in the business of motivation and inspiration! Simon shares what he has learned through his personal journey of being a heart transplant recipient who actually made his way back to a career as a professional athlete. His delivery style was so genuine yet impactful. His message is clear, concise and exactly what people need to hear. His book is also a great take away for attendees. We look forward to continuing our relationship with Simon and would absolutely recommend him as a speaker for future events. If you want your audience to be fully present, think about what they can do better as well as get a full dose of surprise, energy and enthusiasm, Simon Keith is your guy!”  – Libby Crooker, Anytime Fitness

“Simon Keith was a fabulous speaker for our Banquet. His personal story provided so much hope to our guests who are struggling with many of the same issues that he had to endure. His motivation and compassion for others are a gift he shares with all” – Vicki Allen, The Mayo Clinic

Mentions in the news (0)